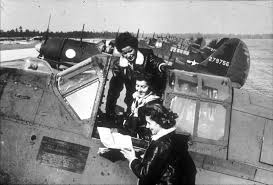 Throughout World War II, many women rose up and decided to join the United States Air force to support the war efforts. These women were known as Women Air Force Service Pilots, or WASPs for short. Women had to go through various training course, the same as men, to be allowed to fly military aircrafts such as B-29 Bombers and P-51 Pursuits(1). Pilots would then be sent out to different bases all across the country in order to learn their new assignments. These pilots were sent from military bases in Texas, California, and multiple missions outside of the United States. Some women were test and ferry pilots, while others were pursuit and bomber pilots.

Many of these women who were test pilots would have to test fly newly built, or repaired planes, before being sent over to the men to fly overseas. Other women who saw combat flew B-29 Bombers or P-51 Pursuits(1). These women were the select few that flew over sea missions, and eventually seeing combat in the air. In 1979, thirty-five years after the disbandment of the WASP’s, the WASP pilots who had fallen were recognized by the government of the United States.

This video shows an interview with former Women Airforce Service Pilot Kristine Swan Lent Gros. In this interview she recaps her experience of what it was like to be an American women pilot in World War II.